Popular
Binge Eating: The Most Common Eating Disorder in...
Eat These Foods To Lose More Weight
Exploring the Intersection Between Obesity and Sexuality
Do Probiotics Help You Lose Weight?
10 Best Herbs and Spices for Weight Loss
Why I Now Believe Male UltraCore is the...
The Easiest Way to Get Erectile Dysfunction Medication
What You Need to Know About Penile Yeast...
The Number One Reason Why Guys Are Bad...
Old Man Sex: What You Need to Prepare...
Home » The Most Common Mood Killers That Every Couple Has Experienced
Sex

The Most Common Mood Killers That Every Couple Has Experienced

Contents show
1 Your mother or your father calling.
2 You both heard a strange noise somewhere in the apartment/house.
3 Suddenly becoming nauseous.
4 Falling off the bed.
5 Arguing during foreplay.
6 Doing the Netflix and chill…but focusing more on the Netflix versus the chill.
7 Sex-related injury.
8 No more condoms.
9 Post-dinner gas.
10 Your playlist goes crazy.

It’s happened to almost every couple on the planet: You’re both in the mood. You’ve teased each other. You’ve kissed down each other’s bodies. You’ve clawed at each other’s body and managed to get all the clothes off. Then, suddenly, that in-the-mood feeling is gone.

There are practically a hundred scenarios that can kill the mood, but I’m going to humor you with the most common ones below.

Start reading, and start laughing, at the mood killers you’ve experienced and the ones that are yet to come.

Your mother or your father calling.

It’s past your parent’s bedtime and yet one of them is calling you late at night. You don’t know if it’s an emergency, so you stop what you’re doing (your sexy time) to answer the phone to make sure everything is okay.

What’s the bad part about the situation? Now that you’ve talked to one of your parents for almost 20 minutes about the problem they were having, you don’t want to have sex anymore.

You both heard a strange noise somewhere in the apartment/house.

What are the two of you to do now? Naturally, you both know that if you ignore the sound, you’ll end up dead, mainly because that’s what all horror movies portray (though hardly the true outcome). So, the two of you stop doing what you’re doing, and you go check out where the noise is coming from. Unfortunately, the noise ended up being something like the cat clawing at the blinds or the heater kicking on.

Now you don’t want to have sex anymore. 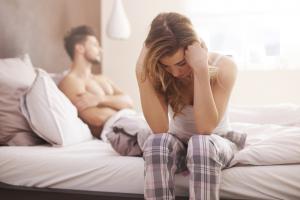 Picture this scene: You’ve had a great date night at the local sushi place. You head back home with your partner and you’re both in the mood to get down and dirty. As the foreplay begins, it gets hot and sweaty in the room, when suddenly you or your partner needs to run to the bathroom to puke.

Let’s be honest, just thinking about throwing up during sex is a mood killer, never mind if one of you has to do the throwing up.

Needless to say, the situation gets serious and puts both of you out of the mood you were just in (especially the one throwing up, because who wants to have sex after that’s happened?).

Falling off the bed.

Sometimes, one of you, or both of you, get caught up in the moment. It’s not uncommon to start rolling around in the sheets and then suddenly fall off the bed or the couch, am I right?

Well, when one of you does get caught up in the moment and falls to the floor, the mood is almost immediately killed. Now you’re asking your partner to run to the freezer to get an ice pack for your rear end!

Everyone thinks that this is impossible, but it’s far from that. You see, it could be something as simple as you bit the tip too hard or he sucked your lips in a more aggressive than normal way. Then, out of nowhere, the two of you are cussing each other out and pushing each other away.

This happens to all couples at one point in their relationship: They get too into the Netflix portion of the Netflix and chill.

A good example of this mood killer would be the following story:

Say the two of you are browsing through the Trending Now section of Netflix, and you both agree to put on a new show that was recently added. The two of you think it’ll be boring, so you decide to watch a little bit of it and then get to the sex part of the evening. Next thing you know, you’re on the twelfth episode of season one and the two of you have to go to bed to get up early for work the next morning (so then you can come home and continue binge-watching the series).

This scenario happens a lot more than you’d think.

Now, this isn’t one of the more common mood killers, but it’s still a mood killer. If you’re going in and out super-fast and you start to feel a cramp in your genitalia area, that could possibly mean that a sex-related injury could potentially happen. Stop what you’re doing and take it easy (this will kill the mood).

What’s my suggestion? Stretch for a few minutes before sex, you’ll be less apt to cramp up. 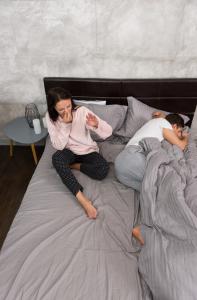 Imagine you and your partner about to transition from foreplay to sex, when suddenly you hear a fart or come face-to-face with a nasty smelling burp, would you still want to have sex after that? Most people would answer no to this question, but if you answered yes, you sure are in love. This is a super-duper mood killer.

Some people, not all, like to have sex while they’re favorite love-making playlist is on in the background. However, they’re never prepared for the playlist to backfire and start playing some heavy metal instead of that awesome R&B song.

When this happens, it may take a while to get back in the mood.