Popular
Binge Eating: The Most Common Eating Disorder in...
Eat These Foods To Lose More Weight
Exploring the Intersection Between Obesity and Sexuality
Do Probiotics Help You Lose Weight?
10 Best Herbs and Spices for Weight Loss
Why I Now Believe Male UltraCore is the...
The Easiest Way to Get Erectile Dysfunction Medication
What You Need to Know About Penile Yeast...
The Number One Reason Why Guys Are Bad...
Old Man Sex: What You Need to Prepare...
Home » 6 Motivational Tips from Massively Professional Athletes
Fitness

Contents show
1 Don’t have a routine.
2 It only counts when it hurts.
3 Surround yourself with positive energy and support.
4 Mind over matter.
5 Let failure propel you forward.
6 Do it for the sex.

One of the best pieces of advice I ever got career-wise was to look at people I admired and ask them what they did. This is especially true when it comes to fitness. When you look at massively talented and successful athletes, you know it doesn’t all come naturally or easily. There’s hard work, effort, dedication, and constant training involved. There are trade secrets. And these days, there’s a hell of a lot of science, dieting, planning, and testing involved. Here are 6 motivational tips from massively professional athletes to help you reach your full potential:

If you’re looking to learn about bodybuilding, look no further than Arnold Schwarzenegger’s The New Encyclopedia of Bodybuilding. It’s a bulky 800 pages of collected ideas and training philosophies according to the Arnold himself. Schwarzenegger revealed one of his secrets was simply variety. “Within a basic framework, I was constantly changing my exercises. I liked to shock my muscles by not letting them get complacent in a constant routine.” Shake it up, you guys.

You don’t want to over-train, but you don’t want to finish a workout without feeling ready to collapse or barf, either. Muhammed Ali’s quote is a personal favorite: “I don’t count my sit-ups. I only start counting when it starts hurting because they’re the only ones that count.”

Where you are and who you’re with can make all the difference when you’re training and in life in general. You know this if you regularly workout with someone else – they can push you or hold you back. Olympic weightlifter and USA Weightlifting National Champion Team coach Greg Everett has this to say about working out: “The atmosphere of the gym is more important than the facility and the equipment. Good athletes with good character will make each other better, but one bad character will fuck it up for everyone. Keep your house clean, trim the dead wood, however you want to put it; it will pay off.” 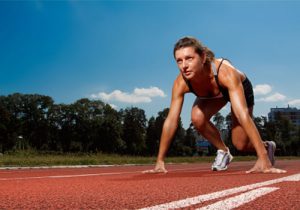 The most decorated Olympian of all time Michael Phelps has a near-perfect body when it comes to swimming. There’s definitely some natural talent there, but he’s put in his time, too. Phelps attributes his success to his mindset, and he’s definitely not the only athlete who does so. “I think that everything is possible as long as you put your mind to it and you put the work and time into it. I think your mind really controls everything.” Simple: put your mind to it.

“I’ve missed more than 9000 shots in my career. I’ve lost almost 300 games. 26 times, I’ve been trusted to take the game winning shot and missed. I’ve failed over and over and over again in my life. And that is why I succeed.” Wisdom straight from Michael Jordan’s mouth.

Usain Bolt is the fastest person ever timed in world history. He’s a fucking bad ass. What propels him forward? Probably all sorts of things. But according to him? “When I’m at the gym, I think about chicks, going to the beach, and looking good. I do it for the girls.” Hey, nothing wrong with that.

8 Tips for Dating a Girl with Depression

5 Reasons Why Supplementation is Important for Bodybuilders

How to Survive the Boredom that is Treadmill...

7 Tips to Pump Up Your Chicken Legs

Not So Fast: 4 Must-Consider Issues Before Settling...

10 Reasons Why You Should Walk More

How to Workout at Work